This guide assumes you already have your products set up in the Google Play Console.

Google Promotions or Promo Codes to give app developers the ability to create codes that are redeemable for one-time products or trials to subscriptions.

One-time codes are unique and auto-generated by the Google Play console. They are limited to a single-use.

Limitations of Promo Codes with Subscriptions

To create promo codes for your app, go to Google Play’s Console ‘All applications' page and select your app from the list.

In the sidebar select Promo Codes. 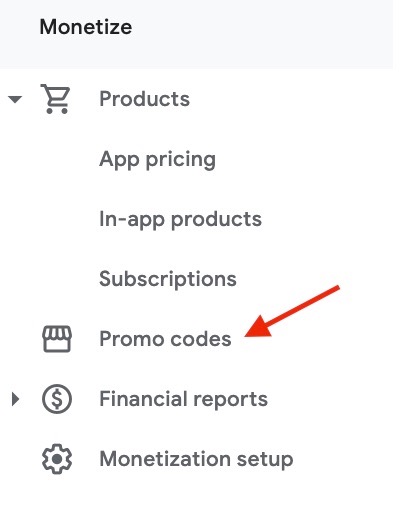 After selecting Create promo code, you will provide several pieces of metadata to provide to create your promotion:

After selecting Save your promotion will be created! 🎉

Promo codes are limited by Google, on a per quarter basis. The amount of promo codes that Google limits varies by promo code type (one-time versus custom promo codes). Any unused codes will expire at the end of the quarter. Any codes that have been redeemed in the Google Play Store, but not redeemed in the app will stay active until the promotion ends.

Promo code redemption can occur in-app or in the Google play store. All code redemptions are handled by Google and don’t require additional UI to be built.

To redeem a code, a user initiates the purchase at the paywall. At the Google Play purchase screen, a selectable down arrow next to the form of payment allows the user to select Redeem code. After selecting Redeem code and entering the code into the prompted field, then selecting the Redeem button applies the entered code.

If you want to save your users the hassle of manually entering their one-time code in the Google Play Store, you can send them a deep link with the promo code already attached:
https://play.google.com/redeem?code=promo_code

With Promo Codes created make sure you're setup for making purchases